You can identify gas leaking from the bottom of the car through its well-known smell. If you move your vehicle and notice a puddle – large or small – occupying the space beneath it, check for the heavy, thick odor of fuel.

A gas leak under your car is severe and must be fixed immediately. While losing fuel is inconvenient, uneconomical, and polluting, catching fire is the more dangerous potential problem. This is reasonably possible, given a freak situation with all the right conditions.

If you notice a gasoline leak, follow the steps outlined below to quickly and efficiently find and solve the issue. In most cases, you should be back driving in no time.

When Is The Gas Leak Happening?

First, check out the video above to see how exactly a car’s fuel system works.

Start by identifying when the problem’s occurring. It’s not always possible, but if you can work this out, you’ll be able to narrow down the potential causes much more easily.

Consider the three situations detailed below.

Gas Leak When The Car’s Stationary (Engine Off Or On)

A fuel puddle developing when the car’s off may indicate that the problem is unrelated to fuel pressure. In reality, gas has probably been dripping all the time you were driving, too – you just haven’t been able to notice it.

There is most likely a tiny hole or crack in the fuel lines, the seals in the system, or the fuel tank itself. The fuel filter could also have a small leak.

Gas Leaking When Ignition’s On (Engine On)

When you turn the key in the ignition, you’ll hear the whine of the fuel pump starting up. These days, like everything else, it’s electrically driven, forcing the gas from the tank, through the lines and filter, and to the engine.

If the leak only begins when the pump is actively working, pressurizing the system, it indicates that the root cause is related to fuel pressure. There may be a problem with the injectors or, more likely, the lines leading to the injectors. These operate at higher pressures than most of the system.

Another possibility is a hairline rupture in any pressurized part, such as the fuel filter and fuel lines. The crack may be so minuscule that the liquid can’t drip through before it’s squeezed through the system by the pump.

Gas Leaking From Bottom Of Car When Filling Up

If you notice gas leaking from the bottom of your car when filling up at a gas station, you’ll find the damage somewhere around the fuel tank or fuel fill hose.

Be aware of any previous spills, though – the problem might lie with whoever filled up before you!

Of course, your engine must be off when you’re in a gas station.

Where Under The Car Is The Gas Leak?

If you can identify the specific component that the leak’s coming from, wonderful. If not, the general area under the car will do.

Do you see a fuel puddle under the…

When you take your car to a mechanic for repairs, mention all this information to them. It’ll give them a great head-start in finding, identifying, and fixing the problem.

Can You Drive A Car With A Gas Leak?

In generic terms and for the purposes of this guide, it’s best to err on the side of caution and say “no.” Remember, gas is highly flammable in the right conditions – it doesn’t take much other than being very unlucky for a small leak to turn into an all-out blaze.

Some sources even suggest driving with a gas leak is one of the leading causes of vehicle fires (although it’s more likely to be collisions or electrical/mechanical malfunctions, as reported by the National Fire Prevention Association).

The engine will probably still start and run with no problem, but don’t let that dupe you into thinking it’s safe. Fuel droplets could drip or spray onto hot vehicle components (like the exhaust or engine – which are both very close by) and ignite.

Getting your vehicle to a mechanic as quickly and safely as possible is still important. The best option is immediately turning the engine off and having it towed by calling for breakdown assistance.

How To Fix A Gas Leak In A Car

As usual, the internet is full of weird and wonderful ways you might consider to be “a good idea” to fix your faulty car part. However, with fuel-related components even more so than usual, it’s vital to take your vehicle to a fully-trained mechanic.

Why? Because the fire risk is enormous. If you don’t know exactly what you’re doing, you might also worsen the problem. For example, you must install the correct fuel line (a car has multiple types) and seals. They must also be in precisely the right place, far away from potential damage and heat sources.

Despite the internet’s best attempts to persuade you, you should always take your car to a professional when it comes to the fuel system. There’s one possible exception. If the problem is, without a doubt, the fuel filter, you might be able to easily and safely change it yourself.

That being said, if you don’t know what a fuel filter is, what it looks like, or where to find it, that should be a warning sign. Take it to a mechanic.

In most cases, they’ll swap out the damaged part for a new one after carefully draining the system (if necessary). Sometimes, leaks in the fuel tank can be patched. Get a quote before the work begins, as your final price may vary significantly based on the specific fault.

Signs Of A Gas Leak In A Car

The best sign of a gas leak under a car is… well, gas being under the car. As mentioned in the introduction, give the liquid a quick sniff (not too close) to confirm it is actually fuel, not water from the air conditioning outlet or some other fluid leak.

Gas usually leaks in a subtle, drip-by-drip way, not a steady liquid stream. You’re unlikely to notice a fuel leak while driving unless it’s a sudden, drastic, piercing hole straight through the tank. Cars behind you probably won’t either.

You might notice the smell of gasoline hanging around in the air long after your engine comes up to temperature. When you first start the car or accelerate hard, the fuel mixture is rich – it’s completely normal to smell gas around these times.

However, if you notice it fifteen or twenty minutes after you start your journey (and you don’t usually), there’s probably something wrong. While it’s more likely to be an overly rich mixture caused by faulty sensors or valves, it could signify a gas leak.

Some articles suggest keeping an eye on your fuel economy as a sign of a gas leak. While your average mpg will reduce, it’s unlikely to change quite as drastically as some suggest and might not be noticeable.

Still, if you’re experiencing poor fuel economy, it’s worth having a quick check of the gas tank and fuel lines for any leaks.

Myths About Gas Leaking From Under Your Car

If there’s a puddle of gas underneath your car, it won’t be caused by any of the following… despite what certain corners of the internet tell you.

Gas cap – while gas caps can become damaged, leading to fuel vapors escaping, liquid gasoline itself will remain where it is unless you drive very quickly over some very nasty, significant bumps. In this almost impossibly rare situation, it’s perhaps possible for gas to splash up and leak through the cap.

Piston rings – piston rings seal the edges of the piston against the cylinder wall. They prevent the fuel/air mixture and exhaust gases from getting into the engine oil. They’re nothing to do with a puddle of gas under your car.

Head gasket – a blown head gasket also has nothing to do with a puddle of gas under your car. If your head gasket blows, you’ll notice a milky substance in the oil (or oil in the coolant).

Fuel system components can come off in bad road conditions – well, technically, maybe. But it’d be a one-in-a-million occurrence. Things on your car don’t just fall off. You don’t lose bits of your vehicle every time you go over a speedbump, do you? (If yes, you need a new car.)

Blogs on the net may look impressive and offer compelling advice, but they’re never any comparison to a good, detailed chat with a local mechanic who can physically see and inspect your car.

I Have A Puddle Of Gas Under My Car – What Should I Do?

If you identify that puddle as gasoline, please – please – switch your engine off and call for breakdown assistance. You’ll need to get your car carried or towed to a nearby mechanic. The problem can most likely be addressed very quickly – probably within a few hours, maximum.

Sorry if that isn’t the news you were looking for, but it’s absolutely what needs to be done. Any other course of action is quite simply too risky to you, your passengers, and other road users.

A gas leak isn’t dangerous to your engine’s health (the possibility of a vehicle fire aside). Once the problem’s fixed and you’re back on the road, your car should be back to its happy, healthy self. 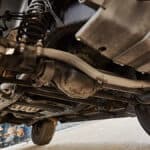