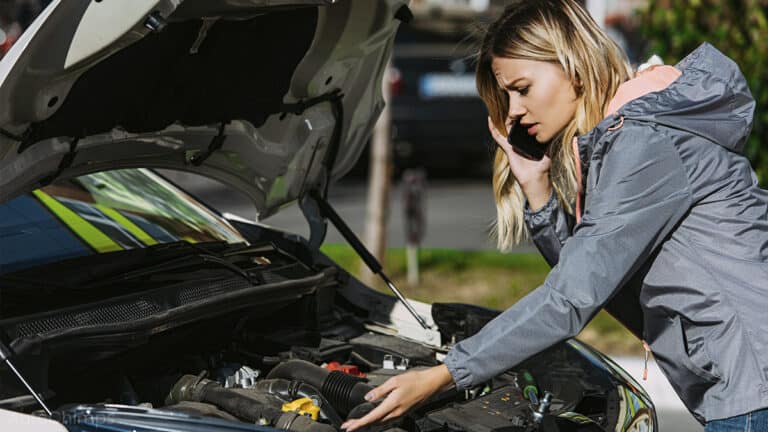 Have you ever had the unfortunate experience of suddenly hearing an engine knocking sound at idle? Then you know that pinpointing the specific problem will take some sleuthing.

Engine knocks are so common that they’re often categorized into subsets, like “detonation knock” and “engine rod knock.”

The knocking could mark the beginning of potentially greater problems if left unchecked.

Or, if you’re lucky, the engine knock could simply be a warning over something easily remedied, such as being low on oil.

Low Oil Pressure Is A Common Precursor To Engine Knocking

Automotive enthusiast forums are packed with posts from car owners who have experienced engine knocking at idle, and many reportedly discovered the issue was due to low oil pressure.

Your vehicle will burn oil from use, but serious problems may arise if your oil pressure dips too low or is uneven or interrupted. The low oil pressure can cause damage to the valves, bearings, or engine.

You can expect any vehicle’s components to make noise, vibrate, and rattle some at idle, which is normal.

But you will know you have a problematic knocking sound if you notice a consistent thumping or ticking noise emanating from the engine bay.

Spark Plugs Could Be A Catalyst For Engine Knocking, But It’s A Simple Fix

Your engine relies on the spark plugs to combust and kick it into action, and if the spark plugs are defective, have an incorrect fit, or fail to detonate properly, the engine may struggle to start. And when it does start, you may hear a knocking noise at idle.

When spark plugs fail to detonate properly, the defect can lead to bigger problems in the future. But the solution is a relatively inexpensive fix that simply requires replacing the spark plugs.

Signs That An Engine Knocking Problem Is Growing Bigger

As evidenced in various YouTube videos, sometimes the engine knock may be subtle, and other times, it may be a much more pronounced and louder sound. Signs that tell you the engine knocking problem is likely a major issue include:

In this guide, we will cover how and why an engine may begin making unusual knocking noises at idle, and we’ll go over some of the more common problems that may be causing the engine to knock.

An engine knock may indicate any number of issues, and if the noise grows louder over time, the specific problem is likely to grow bigger too.

The sound of subtle knocks, rattles, and vibrations are the expected noises you’ll hear from most cars at idle.

However, suppose your vehicle is experiencing particularly loud and consistent engine knocks that seem to be growing louder and more frequent whenever you’re idle. In that case, you may have a mechanical problem that may require a simple fix–or major engine work.

To hear what an engine knock sounds like, check out this clip from YouTuber Zane’s Garage, which highlights a rod knock.

Why Is My Engine Knocking?

If you’re experiencing engine knock, it’s because either your vehicle is low on fluids or there is something out of whack with its mechanical components.

Fortunately, if you confirm that the knocking is coming from the engine, you will be able to narrow down the problem faster.

The general consensus provided by mechanics in online guides and by car owners in countless automotive forums is that the oil is the first thing to check after hearing the engine knocking at idle.

The buildup of carbon deposits inside the combustion chamber can taint the oil and lead to bigger problems. Low oil levels, dirty oil, and oil leaks that starve the engine of fluid are common causes of the engine knocking at idle.

Replacing or topping off the oil may resolve the problem of your engine knocking at idle.

However, if the problem is not due to oil issues, there are other commonly reported problems that may be the cause, including:

“Having low oil, that’ll definitely cause an engine noise, and it’ll cause engine damage,” says the mechanic influencers on the popular 1A AutoYouTube channel.

Potential engine damage is the key reason you’ll want to quickly pinpoint the exact source of the engine knocking at idle before the situation worsens.

How To Fix An Engine From Knocking

Once you pinpoint the source of the engine knocking while idle, you can begin to find an adequate fix.

The first thing you may want to do is to run your vehicle’s make/model/year in the database of the National Highway Traffic Safety Administration. Or check the Insurance Institute for Highway Safety to see if your vehicle has any pending recalls or notices.

These databases can help you identify if there is a known problem that is related to your car engine knocking at idle.

To avoid potentially bigger problems, you can also take your vehicle to a mechanic and request an engine noise diagnostic be done on your car.

DIY Or See A Mechanic?

Can you resolve your vehicle’s engine-knocking problem yourself? It all depends on the specific source of the problem. If the issue derives from dirty or low oil, then you’re looking at a DIY fix that’ll cost you under $50.

But if the engine knocking at idle is due to worn-out internal engine parts or piston failure, the fix will be more complex and costly.

A vehicle noise diagnostics test generally costs around $100-$150 and is the best option to pinpoint the exact cause of the engine knocking problem.

In more extreme cases, if the cause of the engine knocking at idle is due to worn-out engine parts or failing internal components, you’re likely going to need an engine rebuild or replacement, and both options come with a repair bill in the thousands.

The cost of replacing an engine depends on the type of engine and the complexity of the repairs.

The first thing to do if you experience an engine knocking is to act fast to diagnose the cause of the engine knocking. The cause can be anything from a simple case of low oil to a serious problem with a worn-out engine.

The symptoms of an engine knocking at idle are too vague to tell us precisely what the real problem is without doing deeper diagnostics.

So, you may be looking at a repair bill that ranges from a quick $50 oil change to over $5,000 for a new or rebuilt engine.

Getting engine noise diagnostics done at a garage is the best bet to pinpoint and manage the cause of the engine knocking at idle before it becomes a more costly problem. 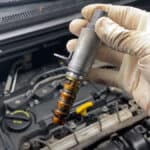 David M. Ciminelli is a Southern California-based journalist and longtime auto enthusiast who has contributed to a plethora of popular automotive sites.