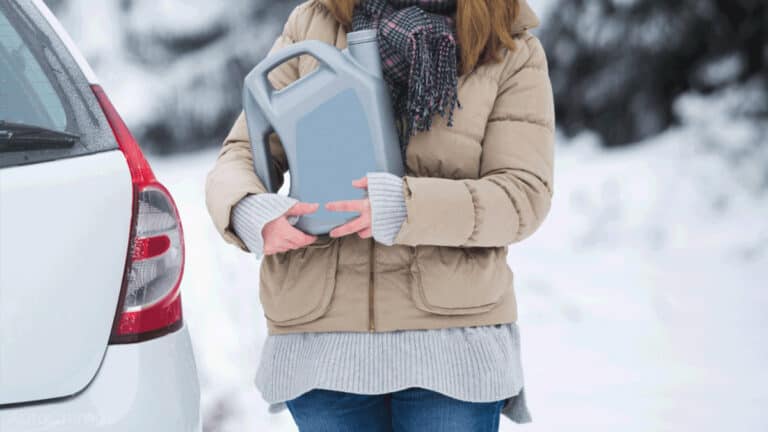 On that cold January morning when you leave for work, you might wonder, ‘Does motor oil freeze? And, if it has, what should I do?’

Don’t worry – engine oil is extremely unlikely to freeze unless you live in the harshest climates.

Motor oil is an essential part of an engine. Without it, the metal parts won’t be lubricated, generating friction and leading to pre-ignition, knock, overheating, and, eventually, engine seizure.

It’s crucial to look after your car – especially in the colder months – to keep your motor healthy and efficient. Your wallet will thank you.

Get an oil and filter change at the recommended interval. Also, ensure your battery is in good health so you’re ready for winter!

This article will examine why motor oil doesn’t freeze and what you should do to protect your car in winter.

Before directly answering this question, it’s essential to understand how motor oil works and the different kinds.

In road cars, motor oil is stored in a sump, usually found at the bottom of the engine. It drains down to this point when you top your oil up through the filler cap.

The oil pump is electrically activated when the ignition key starts the engine. It immediately begins circulating the oil, driving it through the filter and a series of channels throughout the motor.

On its way, it lubricates the metal parts, creating a cushion between them and preventing damage. Motor oil also plays a role in heat control and dispersion.

Finally, the oil ends up back in the sump. The process happens continually, all the time the engine’s running. When you turn the car off, the pump shuts down, and all the oil drains back to the sump.

What Are The Different Types Of Motor Oil?

In the United States, you can get yourself one of four different types of motor oil:

Conventional motor oil is simply refined crude oil. Conventional oil is cheap and usually good for older, low-mileage cars. Synthetic oils are still based on crude oil, but they’re developed with many extra components, additives, and synthesis processes. They’ll provide the more superior performance but cost quite a lot.

Semi-synthetic is a mix of synthetic and conventional – a “best of both” option balancing budget and performance. Finally, high-mileage oil contains additives that target and “repair” seals, helping reduce leaks.

For the vast majority of the population, engine oil will never freeze. It simply doesn’t get cold enough. Well, if it ever does, we’ll have more significant problems than cars not starting!

However, the flow rates of liquids change with temperature. The colder it is, the higher the viscosity and the slower the oil’s flow rate.

You can visualize this with a jar of honey. When you pour it under normal circumstances, the liquid “resists its own flow” (the definition of viscosity). However, put it in the microwave for a minute, and it’ll flow much more quickly when hot. (Don’t burn yourself if you try that!)

Synthetic engine oils contain additives known as viscosity modifiers. This means that the oil flows more easily at lower temperatures. However, they’ll still reach a point where the flow rate is drastically inhibited if it gets cold enough.

Always use the oil your owner’s manual recommends! If you live in a freezing climate, use the minimum “W”-rated oil – for example, 0W-30 instead of 5W-30.

The temperature at which engine oil freezes/stops flowing depends on the type of oil.

What Temperature Does Synthetic Oil Freeze At?

Almost every car on the road today should use synthetic oil. It’s better for your vehicle in every way. Even though it’s more expensive, you’ll most likely save money in the long run due to better performance, engine health, and fuel economy.

Synthetic oil contains many additives; thus, the temperature at which it freezes depends on the manufacturer’s (highly secretive) individual product chemical makeup. However, it still contains crude oil as its base component.

However, remember that synthetic oil is made of many other components. Collectively, it would have to get far colder for it to freeze solid, temperatures we wouldn’t ever expect to see on this planet.

What Temperature Does Conventional Oil Freeze At?

Check out the above video, where you’ll see what happens to oil in a cold engine in a shop based in central Russia.

Conventional oil doesn’t contain the same additives as synthetic oil. It’s much worse for your engine (generally speaking), leaving all sorts of deposits and gunk behind.

That being said, older cars have engines designed for this type of oil, so newer synthetic types may actually decrease performance. For example, it could clean away an old deposit that was plugging a leak. Depending on the age of your vehicle, a high-mileage option might be a better idea. Alternatively, a new engine/car might be in order.

The colder conventional oil gets, the closer it’ll get to a solid state. At around -30 degrees Celsius, you can see how the pump is struggling to make the oil flow.

How Do You Cold Start A Car?

When you turn the key on a cold morning, it’s the battery’s job to power the oil pump. The more electrical energy it can send to the pump, the greater the force it can (try to) force the oil through the engine.

The battery is what you should be most concerned about keeping healthy. Your motor oil will probably be fine, provided you’re using high-quality synthetic or high-mileage.

Now, remember that the colder it is, the thicker (more viscous) the oil becomes. The battery itself will also be affected in cold weather, as the liquids it contains will begin to freeze. As a result, it can’t put out so much current.

You’ll notice that people all across the world have cars. Whether they live in sweltering climates like the Arab states or the cold extremes of Siberia or Yukon, they exist everywhere.

If you’re visiting freezing climates, you might need a few extras to the “normal” car setup. These could include block heaters, although you should always be aware of the fire risk they bring. They keep the battery and oil warmer and thus more efficient when starting.

Follow the tips below to make starting your car in freezing morning temperatures much simpler.

Instead of freezing solid, it simply gets thicker and thicker. It’ll flow so slowly when it’s really cold that it might be thought of as almost approaching a solid.

That being said, most of us rarely experience temperatures cold enough to cause any upset. If you live in the north, you’ll be used to jump-starting and taking precautions in winter.

As a visitor to these areas, you should take your car for a thorough service (from an experienced mechanic rather than a chain!) before heading out on your journey.

What Is Piston Slap? Here’s What It Is And If You Should Worry