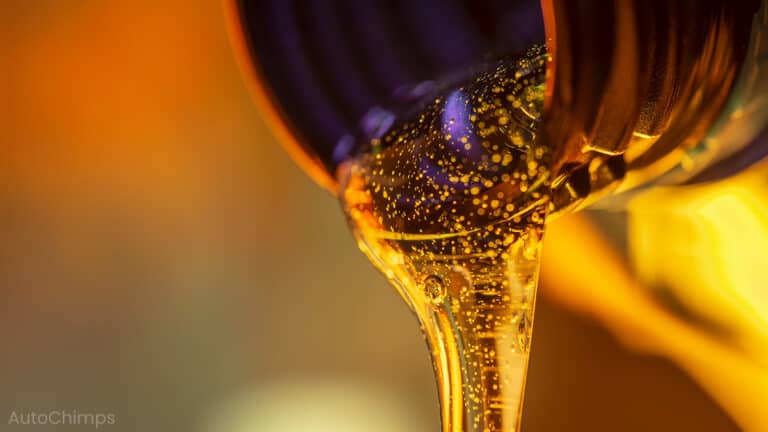 Are you worried that engine/motor oil is flammable?

The short answer is, technically, no. Motor oil is combustible. This classification means it’s slightly less likely to catch fire than something “flammable.”

That said, engine oil will still catch fire if exposed to high enough temperatures. You should always store it well away from anywhere hot or anything likely to ignite.

This article will walk you through the fire risks of motor oil.

What Is The Flash Point Of Motor Oil?

The flash point of a liquid is the lowest temperature at which it gives off vapors that could ignite.

The flash point of engine oil can be anywhere between 300 and 495 degrees Fahrenheit.

The official upper threshold for something to be considered flammable is 199.4 degrees Fahrenheit. As you can see, motor oil is well above this.

Compare this to gasoline. Gasoline is much more flammable and has a flash point of about 40 degrees Fahrenheit.

Motor oil, distilled from raw crude oil, has a high flash point. This is due to its long hydrocarbon chains.

You could think of it as “heavier” than most flammable liquids. Longer, heavier chains require more energy (heat) to vaporize.

Because of this, it’s much less likely to ignite (except in extreme circumstances).

In most normal circumstances, motor oil won’t be exposed to temperatures exceeding 300 degrees. If your engine develops a problem, such as broken piston rings or a blown head gasket, it could make its way into the combustion chamber.

In this case, it’ll burn. You’ll see a blue/gray film in the smoke coming out of the exhaust pipe.

This is an immediate cause for concern. You should drive straight to your local mechanic.

In short, yes. The oil in your engine will burn if exposed to high enough temperatures.

However, the overall flash point of the liquid remains exceedingly high. It won’t ignite apart from under extreme temperatures.

Again, it’s technically proper to refer to engine oil as “combustible” rather than “flammable.”

Synthetic oil (used in most cars these days) is marginally less likely to ignite than regular oil, in general.

It usually requires higher temperatures for combustion. As such, the flash point and fire point are higher.

All types of engine oil have a very high flash point. You shouldn’t worry about spontaneous combustion, although do maintain some common sense.

For example, storing motor oil next to a hot exhaust or wood stove wouldn’t be sensible.

Can You Burn Motor Oil?

It’ll be very difficult to burn motor oil by itself. It’s more likely to burn if you soak another material in the oil (for example, a cloth). It’ll still be challenging to get it hot enough to ignite.

Although it’s possible, you shouldn’t ever burn motor oil. It’s polluting and damaging to your health. The smoke also contains a high carbon monoxide content.

Instead of burning oil, dispose of it according to local governmental rules. You usually need to take all waste oil to an oil disposal plant.

How Should You Store Motor Oil?

Follow some simple principles to store your motor oil safely.

While motor oil might not be flammable in technical terms, it can still catch fire. You should still store it carefully and not hold more than you need.

If you notice your car burning oil – which isn’t that uncommon, particularly on older cars – head straight to a mechanic. You might have a serious problem. The quicker it’s identified and remedied, the cheaper it’ll be.

Finally, don’t burn motor oil. It’s dangerous and toxic. Always dispose of it in the recommended, safe manner by heading to a recycling plant. 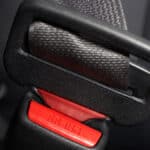 Seat Belt That Won’t Pull Out Or Retract? Here’s The Fix