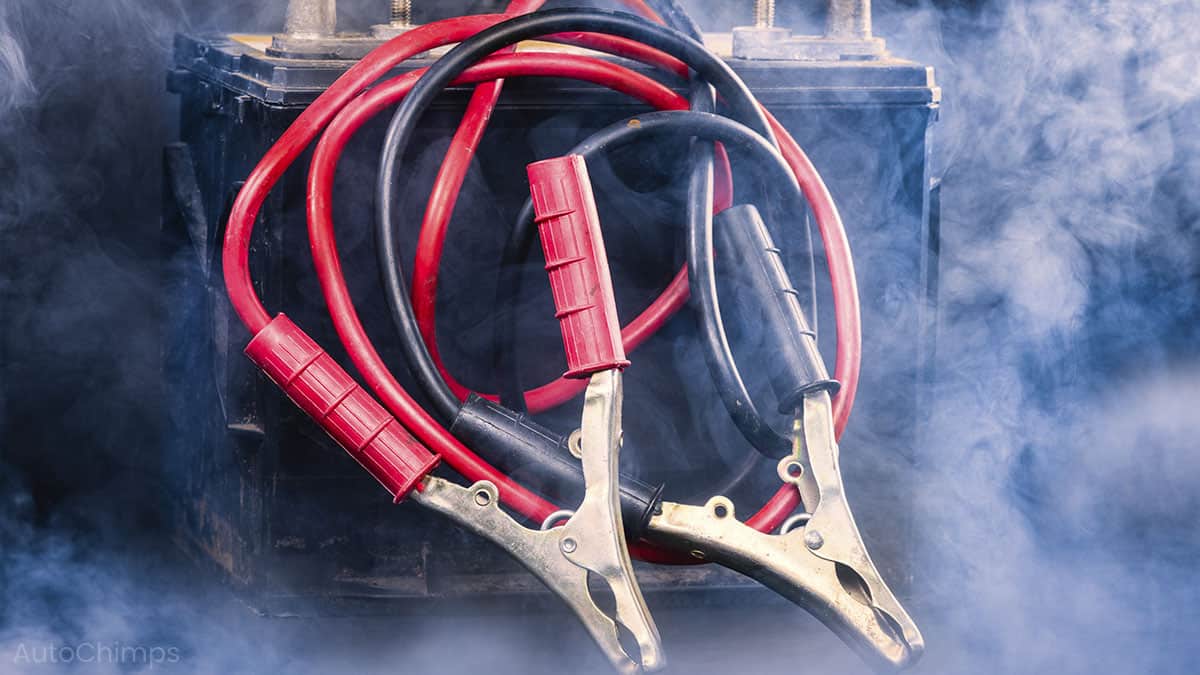 Are your jumper cables smoking, melting, or hot? If so, immediately switch the engine or power pack off and disconnect the wires in the correct order!

If you’re using another car to jump-start a flat battery, you must connect it in the following order:

You must disconnect the cables in the reverse order:

Smoking, melting, or hot jumper cables could be hazardous, doing irreversible damage to your car and possibly even you. Throw them away immediately.

How Do You Jump Start A Car With A Flat Battery?

Jumper cables are used for jump-starting a car with a flat battery. They come with two wires with two alligator clips each, one red (positive) and one black (negative).

Red cables always attach to the positive terminal on each car. Black cables connect to the working battery’s negative terminal and a ground point on the vehicle with the dead battery.

You might have a jump-starting kit with two leads attached to a power pack. Although these are more expensive, they’re a slightly less risky way to jump-start. The danger of damaging the power pack is far less severe than the risk of damaging another car.

Method For Jump Starting A Car

If you’re using another car to jump-start a dead battery, line the two up side-by-side. However, don’t let them touch! This will interfere with the electrical current and could cause damage.

Switch both the engines off and connect the two jumper cables in the “connecting” order above (red, red, black, black). Next, switch on the working car’s engine.

Run it for a few minutes. Usually, idling is enough, but it sometimes helps to sit in the driver’s seat and increase the engine revs. This will charge the other car with a higher current.

After a while, walk over to the car with the dead battery, leaving the other one idling. Start the engine on this car.

Leave both cars running for a few minutes. Next, switch both engines off and remove the jumper cables in the reverse order (black, black, red, red). Make sure the alligator clips don’t touch each other or either car during this process.

What Causes Jumper Cables To Melt?

A few things could cause jumper cables to melt, but the root cause is as follows.

They aren’t able to handle the current flowing through them. The wires inside them become physically hot, leading to melting, smoking, sparking, and general heat.

Here are a few things you must watch out for when using jumper cables.

What Condition Are Your Jumper Cables In?

If there are obvious signs of damage, rust, tears, or foreign bodies, your jumper cables aren’t in working condition. Repairing them is also impossible, so you should scrap them and buy a new pair.

Jumper cables in bad condition lead to some of the wiring becoming damaged. In this case, the current is trying to force its way through a more resistant path. This leads to more heat and eventually melting.

To help prevent damage, store your jumper cables carefully. Don’t pile stuff on top of them in the trunk and keep them in a case, if possible.

Prevention is better than cure!

Do You Have The Right Jumper Cables?

Jumper cables on cars need to be made of strong stuff. Head to a hardware store and look for a pair created explicitly for large vehicles. They’ll be perfectly safe.

Ensure it’s the correct gauge. The higher the number, the thinner (and therefore weaker) the wire. For cars, you should be looking at about 4-gauge, at minimum.

Mechanics are likely to use 0/1/2-gauge. These are the safest but the most expensive.

If you’re trying to use cheap, low-gauge jumper cables to jump-start a dead battery, it’ll simply be too much current for the little wires to handle. They’ll overheat almost instantly.

Connecting The Terminals The Wrong Way Around

It’s crucial to connect the jumper cables to the correct terminals.

Red cables always connect the two positive terminals. These are almost always colored red, too, with a “+” sign on or next to them.

Black cables should connect to the working battery’s negative terminal (“-“) and a ground point on the other vehicle. This should be an unpainted section of metal on or near the engine.

If you accidentally connect the positive terminal on the dead battery to the negative on the working (or vice versa), it’s known as “crossing wires”. This could be very dangerous.

In essence, this sends the electricity the wrong way and will reverse the polarity of the other car, making the entire electrical system unpredictable. Fuses might blow to prevent this, but they’ll also need to be replaced.

The jumper leads may start to get hot because of crossing wires.

Jumper Leads Have Poor Connection To Either Battery

To connect the two vehicles, the jumper cables need to grip onto the battery terminals and ground point. The metal teeth on the alligator clips (at the ends of the jumper cables) help do this.

The electricity can’t flow easily when something affects the jumper cables’ connections. There’s more resistance, leading to more heat. Eventually, this could turn into smoking or melting.

The following things could impact a jumper cable connection:

What Should Good Jumper Cables Have?

You should look for jumper cables that are at least 4-gauge. 2-gauge, 1-gauge, or 0-gauge would be even better. However, they’re more expensive and probably aren’t necessary for occasional general usage.

Rubber or plastic handles are also important. They’re insulators, meaning they don’t allow electricity to flow easily. In the rare case of a shock, these handles absorb the electrical charge, stopping it from hurting you.

You’ll also need relatively long, well-insulated wires. 20 feet should be more than enough for most circumstances. You’ll get away with 10 feet, too. Anything less, and you might start to struggle to line the cars up close enough.

Finally, look for jumper cables that come with a case (or that you could buy a case for). Cases simply keep them protected from anything else in your car or trunk. They also keep it a little tidier.

What Should I Do If My Jumper Cables Start Smoking Or Melting?

If your jumper cables start smoking or melting, you must immediately switch off the engine or engines.

Carefully disconnect the cables in the correct order. Remove:

Throw the jumper cables away. They aren’t safe to use for you or anyone else. You should buy a new pair before attempting to jump-start another car.

You shouldn’t ever use jumper cables if they show signs of smoking, melting, or getting excessively hot.

The main risk is fire ignition. Batteries give off flammable gases, and your car is also filled with gasoline, and the jumper cables themselves could spark.

If they get hot enough, the heat alone could be enough to ignite your car, sending it up in flames. As an electrical fire, this would be extremely dangerous and needs to be extinguished using either a carbon dioxide or powder fire extinguisher (NEVER water or foam!).

The other connected car would also be in danger of the flames.

The less common (but still possible) risk is an electrical overload. If jumper cables aren’t “carrying” the electricity properly, a sudden surge could severely damage the other car’s ECU. This is a costly diagnosis and repair from an automotive electrician.

Jump starting is an important skill to have. It might save you in a tricky situation, and it all goes smoothly 99% of the time.

However, if you’re jump-starting a car – whether it’s yours or someone else’s – and the jumper cables begin smoking and sparking, immediately switch everything off and carefully disconnect them.

The jumper cables should be immediately thrown away. The next step should be to check for any damage to the cars. Do this by starting the engine and turning every electrical appliance on, including looking for dashboard warning lights. Are there any issues?

If your jumper cables do start smoking and it causes an electrical problem, you may need to get your car towed to an auto shop. Mechanics will need to do some in-depth diagnosis work and may send it to an automotive electrician. Expect to pay up to $1,000 and beyond.

Buy high-quality jumper cables, and all this is unlikely to ever happen. When you start seeing signs of wear (which shouldn’t be for many years, provided you look after them well), discard your old ones and get a new pair. 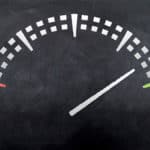 How To Improve Your Gas Mileage