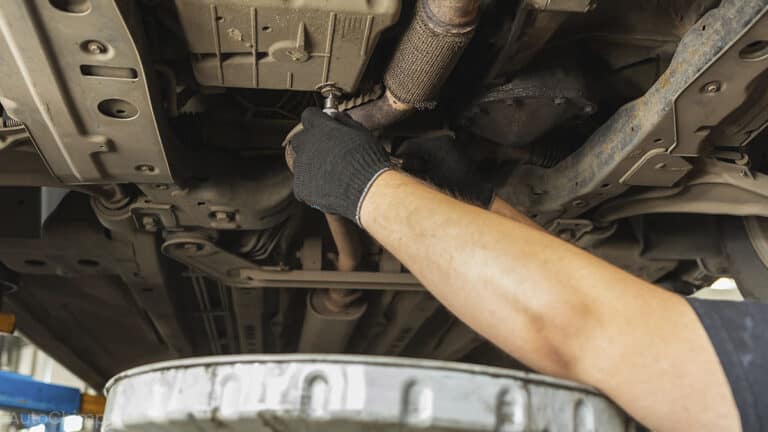 When it comes to removing a stuck oil drain plug, it can feel hopeless. How will you ever change the oil if you can’t get it off?

Luckily, this is a reasonably simple job. The stuck oil drain plug should still be holding oil in the sump, so drive to a local mechanic and ask them to do it.

If you’re intent on doing it yourself, that’s also possible. But if you’re unsure, be very careful!

This article will explain why you can’t get your oil drain plug off and what mechanics will try to loosen it.

What Is An Oil Drain Plug?

Motor oil gets pumped around the car via the oil pump. It lubricates the engine, ensuring everything works nicely and smoothly.

It’s stored in the oil sump – a reasonably large metal container bolted onto the bottom of the engine. The sump’s a little different in some vehicles, such as racecars and motorbikes.

An oil drain plug sits in the bottom of the sump. It’s there to allow mechanics to drain the oil out. Gravity does the rest of the work.

Once the oil flow stops, the mechanic reinstalls/tightens the oil drain plug with a new washer. The ramp is then lowered, and oil is poured back into the engine from the top.

Some manufacturers place oil drain plugs on the bottom face of the sump. Others install them pointing outwards at the base of one of the sides (usually the front or back).

Finally, in most cars, the oil drain plug comes out entirely. However, some vehicles’ plugs only loosen to a certain extent. The oil is then allowed to drain without the need to remove it fully.

If you can’t loosen the plug, make sure it isn’t one of these! Check in your owner’s manual or by watching a YouTube video.

Why Does An Oil Drain Plug Get Stuck?

Thankfully, it’s rare for an oil drain plug to get stuck.

The oil drain plug shouldn’t get stuck if a car has regular maintenance. Well, under most circumstances, at least.

The most likely reason for a stuck oil drain plug is rounded-off edges. This will most likely have happened when it was last replaced.

Also, rust can find its way in from the outside, meaning the oil drain plug won’t come out.

Another (incredibly irritating!) way oil drain plugs get stuck is when previous technicians/DIYers overtighten them. It should be tightened to the torque recommended in the owner’s manual. Any more is too much.

Even worse, you sometimes see that someone’s applied Loctite Threadlocker. Why?!

Finally, sludge buildup within the sump could cause a bolt to seize up. Old motor oil eventually turns into sludge, increasing oil pressure. This cakes everything in the engine and stops it from working. If the sludge gets into the oil drain plug’s thread, it might harden and prevent it from turning.

The most important tip is to ensure you have the right tools for the job. Avoid using the following:

If someone tells you to use a power tool, ignore them. You’ll put so much force through the bolt’s shaft that the head will snap off.

This is known as shearing – more on it later.

Likewise, breaker bars (also known as power bars) will probably apply too much torque. As a last-ditch option, you could try using it very carefully and gently!

You’ll have to be patient to avoid stripping or shearing the bolt.

How To Remove A Stuck Oil Drain Plug – Rounded Off

Get yourself some bolt extractors, if you can get hold of some. You should find sets online for about $35.

If you can’t get bolt extractors, you’ll need to resort to old-fashioned, non-pretty methods. You’ll need some old sockets and a mallet.

The only way to do this is to hammer this bolt extractor/old socket onto the oil drain plug. You’ll need an old Torx/square/Hex bit for bolts with non-protruding heads.

Once your extractor/socket/bit is hammered into place, use a standard ratchet to untighten it.

You might need to give it a bit of a whack with the hammer or your hand to help it along but do so gently. If you apply too much “shock” force, it might slip off the rounded-off head.

Watch out for the oil pouring out onto you.

Throw the old oil drain plug away. It’s useless. Buy a new one and fit it with the new washer. Tighten it up to the recommended torque. You’ll find this in your owner’s manual.

How To Remove An Oil Drain Plug Stuck At The Thread

If the oil drain plug’s stuck due to overtightening, Loctite, or dried sludge, proceed with caution.

It’s not necessarily a good idea to keep applying more torque with lengthier tools. You might shear the bolt.

Spray the area underneath the drain plug with anti-seize spray. Of course, it’ll be too tight for much to get in there, but it might give you a slight extra boost.

You might also consider cleaning the area with brake cleaner. Removing as much grease as possible again won’t make much difference. However, every little helps.

If you can loosen the bolt, even a faction, it’s a good sign. Squirt more anti-seize spray in there, wait a few minutes, and try again.

In theory, a little bit at a time, you’ll be able to remove the oil drain plug without stripping the thread.

Eventually, it should come out. Don’t get too excited and forget about all the oil about to pour on your head!

Watch How Much Easier It Is On A Mechanic’s Ramp

It’s much easier to get better leverage when the car’s on a two- or four-post ramp, like those you see in an auto shop.

That’s partly why, when it comes to oil changes, you may as well just leave it to the professionals. They get oil much cheaper than you do, anyway.

Make Sure The Oil Is Warm Enough To Flow

That is, it becomes “thinner.” This means it flows easier and might trickle past the thread, making things easier for you.

Remove Rounded-Off Bolts By Switching Between Imperial (SAE) And Metric

When hammering old sockets onto rounded-off bolt heads, a helpful tip is to switch from Imperial to Metric and vice versa. These sizes differ so marginally that using similar diameter sockets can do all the work for you.

Offset Spanners Are Easier Than Standard Ones

Try an offset spanner if you’re stuck using a regular spanner and the bolt is on the bottom of the sump. It gives you more room.

Instead of using a bigger tool, continue using your ratchet or spanner.

Use your weak hand to hold the head/ring in place. With the base of your strong hand’s palm, hit the tool perpendicularly.

The shock, jarring force often breaks the bolt free from whatever’s holding it in place. You’re much less likely to shear the drain plug by this technique than by getting a lengthier tool.

Please bear in mind that if your hands aren’t used to it, it might hurt and bruise. You could try using a hammer instead.

Don’t Forget About The Oil Flowing Out!

As alluded to, don’t forget that the oil will flow out once you remove the bolt. Don’t get it all over you or the ground! Have the oil pan in position, waiting, and ready.

What To Do If You Strip The Thread

If you strip the bolt’s thread, you’ll need to throw the old one away and re-tap the hole (insert).

If you aren’t trained to do this, get some help now. It isn’t too tricky, but it’s easy to do it wrong.

The best way to learn the correct measurements is to order a replacement oil drain plug. Before proceeding, ensure it looks the same as the one you removed.

Use a thread pitch gauge and measuring gauge to get the new plug’s measurements. The diameter should match the hole precisely if it’s the correct part.

Re-tap the hole using the correct tap and the T-handle.

The new oil drain plug should fit right in if you’ve done it correctly. If not, try again. Things might not work out for whatever reason, in which case you’ll need a new sump.

What To Do If You Shear The Bolt

If you apply too much torque for the oil drain plug to handle, it’ll snap off. It’s not necessarily your fault – it might be so stuck it’s beyond hope or perhaps rusted throughout.

Your only realistic option is now to extract the oil with an extractor. You’ll then need to remove the sump from the bottom of the engine and clean out any remaining oil.

Now, drill the sheared bolt out. Be careful because oil is flammable – make sure you clean it well. Re-tap it (as above) and install a new plug and washer.

Reattach the completed sump to the car and pour the oil in, sticking to the recommended grade and quantity. Run the engine and check for leaks, watching until the engine warms up.

If drilling and re-tapping don’t sound like an option, you’ll need an entirely new sump.

If your oil drain plug won’t come out, all is not lost! In most circumstances, you’ll be able to remove it without resorting to last-ditch alternatives.

Even then, you have little to worry about.

The main lesson here is that if you’re unfamiliar with cars, leave it to the experts. They do this kind of thing every day.

In the meantime, you can help prevent a tight oil drain plug by replacing it every three or four oil changes. 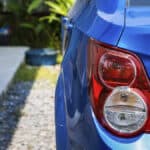