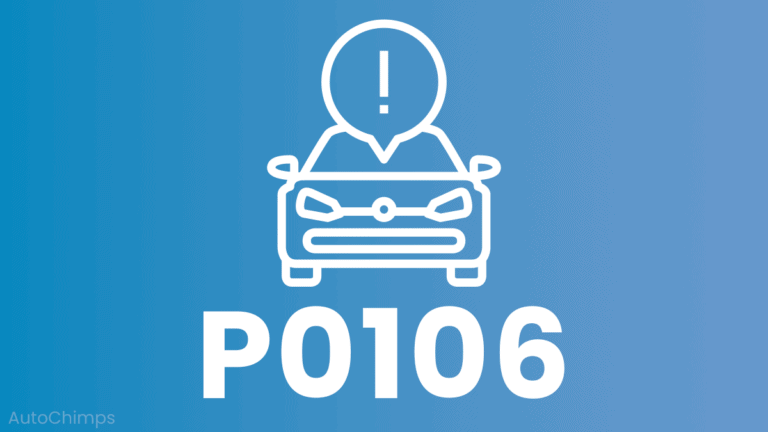 So, you have a Check Engine light. You’ve connected your OBD II code reader to your car, and it’s showing a P0106 code.

Wow, what a mouthful.

Although all these words might look overwhelming, it’s referring to a simple (but serious) problem. You’ll need to fix it immediately, as with anything that causes the Check Engine light to come on.

This article will walk you through the P0106 code and why it’s showing up on your OBD II code reader. It’ll then tell you how to fix it.

What Does The Trouble Code P0106 Mean?

That’s a lot of words, so let’s walk through it step by step.

The Manifold Absolute Pressure (MAP) sensor monitors the air pressure in the intake manifold. This air pressure is known as ‘engine load.’

The engine is constantly sucking in air through the intake manifold when you’re driving along. Pressing the accelerator pedal opens the throttle butterfly plate, allowing more air in. In turn, releasing it chokes (or ‘throttles’ – see?) the oxygen flow.

The air is sent from the manifold to each individual cylinder. The more air there is (the more you’re pressing the gas pedal), the more fuel the injectors need to introduce. It’ll also affect the ignition timing of the spark plug.

The MAP sensor’s job is to tell the Powertrain Control Module (PCM) exactly how much air is going into the engine at any given moment. The PCM takes these readings and, from them, calculates the fuel injection and timing.

Note: a PCM controls the powertrain – the engine and transmission. The ECU is broader for the module controlling the engine and, from it, the overall car. A modern car’s ‘ECU’ might contain will over 100 different modules.

The MAP sensor is a type of Barometric (that is, ‘atmospheric’) Pressure Sensor.

So, this sensor has an ‘electric circuit output range and performance problem.’ In simpler terms, that means the sensor is producing strange readings that don’t match up with any change in the amount of air in the manifold.

What’s The Problem With The MAP Sensor?

Getting the P0106 code usually means you have an issue with the MAP sensor itself.

The MAP sensor could have developed a fault or been affected by debris or moisture. There’s plenty of that in the air the car is breathing in.

The wiring to the MAP sensor could also have been affected.

Finally, a significant leak in the intake manifold (such as a big crack) might lead to bizarre air pressure variation. The PCM would register this as a sensor fault, even though the sensor’s fine and the issue lies with the manifold.

The first thing you’ll notice is a Check Engine light, of course.

After that, the most obvious thing will be a lack of power caused by misfires and inefficient burns. For example, accelerating will take longer than usual, making the car feel sluggish.

This happens because the PCM doesn’t know how much oxygen enters the chamber. It can’t send the right amount of fuel for an optimal burn. Instead, it’ll send a generic amount, often resulting in a rich fuel mixture.

Because of this, you end up with the following P0106 symptoms:

In most cases, you’ll need a new MAP sensor.

It’s as simple as disconnecting the old one and installing the new one.

Alternatively, you could figure out what’s wrong with your old one. Most of the time, this takes too much time and is too advanced for most people to fix.

Of course, the other possibility is that the P0106 code refers to a crack in the intake manifold.

If you find something like this, you’ll need a new part. It could be an individual pipe or the entire manifold.

Fixing the old one is pretty much impossible, although strong duct tape might work temporarily.

Simply take the old part off and replace it with the new one.

How Much Does It Cost To Fix P0106 Engine Code?

A new MAP sensor costs somewhere in the range of $50 to $100. It won’t take a mechanic too long to install, so expect another $50 in labor rate charges.

You’ll pay a similar amount for a new air intake pipe – perhaps less. You can expect to fork over $50 to $125.

It really depends on what the manifold is made of. Plastic manifolds could be $50 to $100 for most standard cars. In contrast, cast iron or aluminum models might be $500 or more.

As you can see, you might pay anything from $250 to $800. The main factor is what your car’s intake manifold is made from.

Once the sensor or intake component is replaced, a mechanic needs to clear the stored codes.

You can do this yourself if you have your own OBD II diagnosis tool.

Note: don’t buy the cheapest code reader you can find. If there’s a problem, a subpar code reader could short out and erase your PCM, effectively damaging your car. Get a high-quality one, or don’t get one at all. It’s best to leave it to a mechanic.

The Check Engine light should now turn off.

If it comes back on, reattach the OBD II tool and see what codes the PCM displays.

If the P0106 code is still present, you might need to look at the other possible cause (either the MAP sensor or the air intake system).

If the problem persists, it’s time to surrender and take your car to an automotive electrician.

Kia/Hyundai Cars And The P0106 Code

Here’s a final note to remember if you drive a Kia or Hyundai vehicle. (Hyundai is the parent company of Kia.)

There appears to be an issue whereby removing the battery (or completely discharging it) triggers the P0106 code.

It’s unclear what causes this, although it’s likely related to the low voltage from the dying battery. It’s a false code – there’s no problem with the MAP sensor or intake manifold.

In most cases, the code doesn’t come back on after a few starts. If you reset the light and drive a few miles, the code shouldn’t reappear. You might have to start it a few times before the settings clear and it goes back to running normally.

Concluding Thoughts On The P0106 Code

If you have this error code pop up, don’t worry. You can usually solve it with a simple sensor replacement.

Get it fixed immediately to save yourself future costs. If you don’t, your engine will run rich.

This leads to poor fuel economy and an unreliable driving experience. Running rich means lots of components will clog up with hydrocarbons, including: 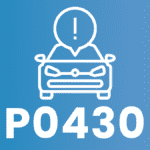