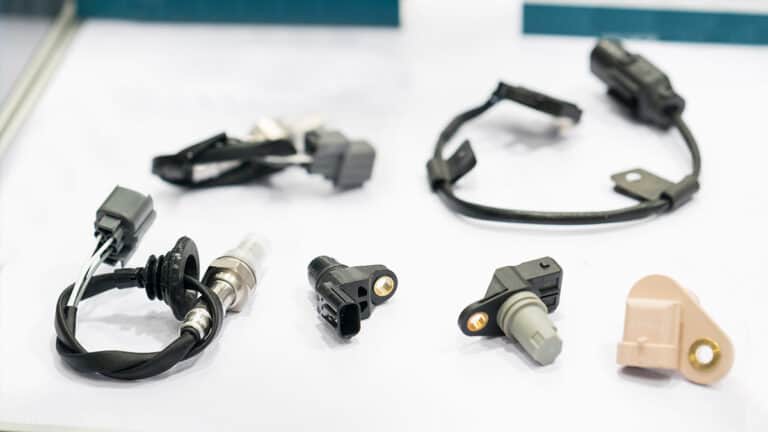 This is just one of many automotive features relying on sensors to operate. Sensors are also found under the hood, assisting the engine management systems and in the brakes, tires, and more, ensuring everything works properly.

In total, how many sensors are in a car? The average vehicle has roughly 60 to 100 sensors, 15 to 30 of which are engine management sensors. Specialty models, or higher-end cars with more safety and convenience features, can even exceed 200 sensors.

The car sensors list below details 15 of the most common types of sensors found in modern vehicles, covering what they do, where they’re located, and what signs suggest a problem.

Simply put, oxygen sensors (also known as O2 sensors) monitor the amount of oxygen in the exhaust gas before and after it exits the tailpipe. These numbers are then relayed to the vehicle’s electronic control unit (ECU), which adjusts the air/fuel ratios, so the engine runs optimally.

Most modern cars have two oxygen sensors per exhaust pipe, meaning single-pipe systems have two, while models with dual exhaust have at least four.

Where are oxygen sensors located? Typically, each exhaust pipe has one O2 sensor mounted before the catalytic converter to measure the air going in and one after for what comes out.

Should an oxygen sensor fail, the most common symptom is a reduction in fuel economy by as much as 20%. Other signs to watch for include black smoke from the exhaust, a sulfuric smell, engine hesitation/surging, and more.

Do you still have questions about your vehicle’s oxygen sensors? Check out our in-depth guide here.

The mass airflow sensor (or MAF sensor) is a key part of a vehicle’s fuel injection system and measures the volume of air entering the intake. This engine sensor’s readings get sent to the ECU to determine the amount of fuel to provide the engine for optimal combustion.

Where is the mass airflow sensor? The MAF sensor is typically on the left side of the engine compartment, between the vehicle’s air filter and intake manifold.

What happens if the mass airflow sensor goes bad? Too much or too little fuel will be sent to the combustion chamber, causing poor performance. If the engine struggles to start, stalls shortly after, or hesitates while accelerating, the MAF sensor may be faulty.

Running out of motor oil can lead to extremely costly problems, like a blown head gasket or a seized engine. Thankfully, most modern cars have an engine oil level sensor to alert the driver via a dashboard warning when levels fall low.

Signs of a faulty oil level sensor include an incorrect oil level reading (confirmed by checking the dipstick manually) or a dashboard oil light that turns on and off repeatedly. The check engine light may also appear, and in the worst cases, the motor might not turn over.

Most engines also feature an oil pressure sensor that alerts the ECU to display a dash warning light when the pressure goes outside the optimal range. Should pressure drop too far, parts of the engine may not receive enough oil, increasing the odds of harmful metal-on-metal contact.

How do you know if your engine oil pressure sensor is bad? If a red, low-pressure indicator appears on the dash while oil levels are normal, the sensor may have a problem. Possible symptoms include the check engine light appearing and rattling sounds coming from the engine.

As its name implies, a coolant temperature sensor (CTS) keeps track of the temperature of the coolant/antifreeze mixture in the engine’s cooling system. A faulty CTS may send incorrect signals to the ECU, potentially causing the motor to overheat.

Where is the coolant temperature sensor? There may be two sensors depending on the vehicle’s year, make, and model. Newer cars typically have just one, often near the thermostat housing. Earlier models featured another sensor to help control the radiator fan.

Other than overheating, the check engine light may appear if the coolant temperature sensor fails. You may also experience poor fuel mileage and engine performance.

Think your coolant temperature sensor may be bad? Be sure to inspect the coolant level to ensure there’s enough to support the engine. Not sure how? Check out our detailed engine coolant guide.

The further you press a car’s gas pedal, the wider the throttle valve opens, allowing more air to enter the carburetor. Modern engines use a throttle position sensor (TPS) to measure how far open the throttle valve is and communicate it to the electronic control unit.

Where is the throttle position sensor? The TPS is typically found on the butterfly spindle/shaft inside the throttle body, often between the air filter and intake manifold.

If your car fails or struggles to accelerate, idles rough, or stalls, the culprit may be the throttle position sensor. Be sure to review our previous article, covering more details on what happens when the electronic throttle control goes bad.

Where is the intake air temperature sensor located? Look for the IAT between the air filter and the intake manifold attached to the intake pipes. In some cars, the IAT is built into the MAF sensor on the left side of the engine bay.

Symptoms of a bad intake air temperature sensor include a drop in acceleration, the engine struggling to start in cold conditions, a rough idle, misfires, and poor fuel economy.

Most models feature a coolant level sensor to ensure your engine and its parts stay sufficiently lubricated. This sensor informs the ECU to warn the driver via a dash indicator should the antifreeze drop below a certain amount.

Where is the coolant level sensor? This engine management sensor is part of the cooling system, often found on the radiator or on the bottom of the expansion tank.

One of the most common symptoms of a bad coolant level sensor is the dashboard oil warning indicator remaining on. Watch the engine temperature as well, and if it gets too hot, be sure to check the coolant level via the dipstick manually.

Perhaps the most important sounding item on this car sensors list is the manifold absolute pressure (MAP) sensor. Part of the electronic control system, the MAP sensor communicates manifold pressure data to the ECU to calculate air density and optimize performance.

Where is the manifold absolute pressure sensor? The MAP sensor should sit on top of the intake manifold, beside/on the throttle body. For models equipped with turbo/superchargers, this engine sensor is usually on the intake tract before the turbo.

Unique to cars with forced induction (turbo/superchargers), the boost pressure sensor reads the amount of pressure between the turbo and the engine. The ECU uses this to adjust the engine’s air/fuel mix and boost pressure for optimal efficiency.

Where is the boost pressure sensor located? Find this engine sensor in the intake pipes at the throttle valve.

Boost pressure is often displayed on a vehicle’s dash, and if the sensor fails and levels fall too low, you’ll experience reduced performance and acceleration. The engine may also have difficulty starting or feel rough while idling or speeding up.

A vehicle’s crankshaft is a forged steel or cast-iron shaft that rotates alongside the engine’s connecting rods. The crankshaft takes the reciprocating motion made by the pistons during combustion and converts it to rotational.

A camshaft is a pole that also rotates and works in tune with the crankshaft to open and close the engine’s valves. One or more sensors record the locations of these components and relay them to the ECU.

A bad camshaft or crankshaft position sensor can spell disaster for an engine. One or more of these sensors may require attention if you notice problems during startup, uneven acceleration, vibrations from under the hood, or engine stalls.

For a closer look at how a crankshaft and camshaft work together to power a vehicle, be sure to read through our detailed guide on how a car engine works.

Some vehicles, especially those powered by a diesel engine, also have a NOx sensor to measure harmful nitrogen oxide particles exiting the exhaust. Should levels become too high, the system will adjust to compensate, reducing emissions.

Where is the NOx Sensor located? NOx sensors are attached to a vehicle’s exhaust pipes. Look for a cover with an electrical cord coming out.

The main signs that suggest NOx sensor failure are an extreme drop in fuel economy and engine power. Your vehicle may also enter a “limp mode” or even stop running entirely.

Cars also feature a fuel temperature sensor to record and send findings to the ECU. This data helps the system calculate how much fuel should be injected to maintain balanced ratios during combustion.

Where is the fuel temperature sensor located? This engine management sensor sits under the hood, on the right side of the vehicle, atop the fuel tank.

Here’s an interesting one, the engine knock sensor. The purpose of a knock sensor is to monitor high-frequency vibrations and sound coming from the engine block caused by uneven detonation. The ECU uses this data to determine ignition timing, protecting the engine from harm and optimizing efficiency.

Where is the engine knock sensor? Find this car sensor screwed into either the engine block, cylinder head, or intake manifold.

As for what happens when a knock sensor goes bad, the system won’t adjust for problematic engine vibrations, throwing things off balance. Common symptoms of failure include reduced power and fuel economy, as well as a pinging sound coming from beneath the hood.

The final item on our car sensors list is the fuel pressure sensor. True to its name, this sensor oversees the pressure within the fuel rail. The engine control unit uses these readings to optimize fuel flow and detect leaks in the evaporative emissions system.

Where is the fuel pressure sensor located? Inside or on top of the fuel tank, integrated into the fuel pump assembly.

Sensors serve an important role within a vehicle: they allow the different components to communicate so the system can optimize power production. They also alert the ECU to warn the driver should a potential issue come up.

Sensor failure means the ECU won’t receive accurate readings, throwing things off balance and leading to costly problems if ignored. The good news is that sensors rarely cost more than $500 to replace, according to pricing estimates from Repair Pal.

On the high end, cars can have more than 200 sensors, depending on the number of safety, convenience, and performance features present. These include sensors to record tire pressure, the distance of the car to outside obstacles, if passengers are present in a seat, and so much more.

Just remember, if a warning light appears on your dashboard, it’s because a sensor caught something out of the ordinary. Not sure what the different dash lights mean? Check out our guide covering what each symbol looks like and means. 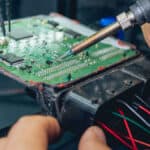