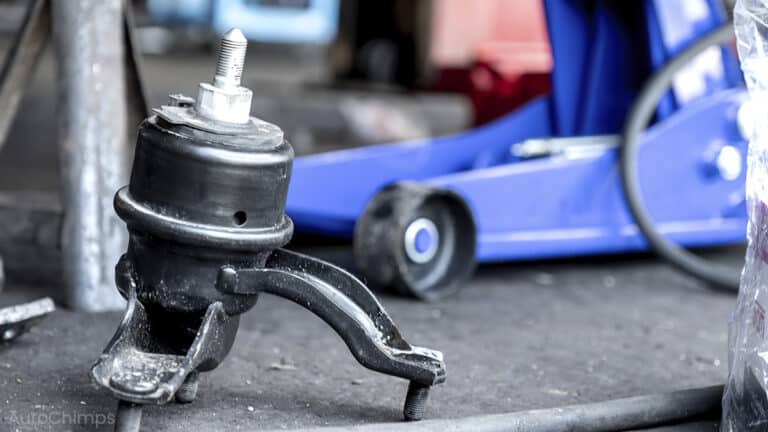 If you have a bad motor mount, you might want to know how serious the problem is. Can you drive with it? Or will your engine crash out of your car and cause a pile-up?

Thankfully, that’s unlikely. However, repairing things as soon as you notice them is crucial. It’ll save you money in the long run and ensures everything runs safely.

You can technically drive with a bad motor mount – but why would you? Get it fixed, and enjoy a more comfortable and securer driving experience.

This article will explain why you should follow that advice.

What Is A Motor Mount?

They’re pretty important. If motor mounts weren’t used, the engine would have to be bolted directly to the chassis. That might not sound too serious, but the resulting vibrations would be thunderously loud and uncomfortable.

It might help to think of them as suspension for your engine.

Motor mounts are usually made of hardened rubber. This material is a great compromise, with strength, flexibility, and vibration absorption.

They come in many different shapes, sizes, materials, and styles. Manufacturers create each mount to hold a specific engine within a particular car. Thus, they’re all slightly different.

How Do Motor Mounts Go Bad?

The most common way for motor mounts to break is a simple snap.

Over time, they – like all automotive components – wear down. They can also be affected by the engine’s heat and water/dirt residue from the road.

These can lead to dry rot, which will eventually eat through a motor mount.

Your car might have hydraulic fluid-filled or vacuum chamber motor mounts. If either of these cracks, they’ll stop working.

Other causes of breaks include sudden, intense forces (such as a significant pothole or a big crash). An improper replacement from a previous repair would also affect the forces acting on it.

A broken motor mount is most often not your fault. It just happens with time – they get old and worn out.

How Do I Know If My Motor Mount Is Bad?

There are several symptoms of a bad motor mount. In summary, your car will still have the same amount of power, but it’ll feel much less comfortable and smooth.

If your vehicle still feels powerful along with these symptoms, it’s likely to be a broken or breaking motor mount. Use this sensation to distinguish the problem from other issues, such as misfires or a struggling transmission.

The engine block might drop directly onto the car’s metal frame when a motor mount goes bad or breaks.

A motor consists of several cylinders (usually 4, 6, or 8) blasting up and down several thousand times per minute. That equals a lot of vibrations.

Instead of being dampened by the rubber mount, the vibrations travel straight into the chassis. The metal transfers this feeling throughout the vehicle.

As such, you – the driver – will feel it, but so will all your passengers.

Vibrating could also be caused by many other things – most notably, misfires. However, in this case, you’d also feel reduced engine power.

Other potential causes are:

Clunks And Jolts When Accelerating, Braking, Or Changing Gear

If the car feels like it jumps when you accelerate or change gears, it could be a bad motor mount. You’ll often even hear the clunk of the engine shifting.

Putting any kind of high force on your car (accelerating, braking, or changing gear) makes the car ‘dive’ or ‘squat.’ ‘Dive’ is when the front dips down (such as under heavy braking). ‘Squat’ is the opposite: when the front lifts up, such as when you slam your foot on the gas pedal.

The engine itself is suspended in space by the motor mounts. It experiences the same forces, but it’s only connected to the car through these mounts.

If you have a bad motor mount, the engine won’t adjust to the car’s angle so well. That might result in a clunking sound or a jolting feeling.

Again, expect this symptom to appear alongside excessive vibrations. If you feel this symptom alone, it’s more likely to be a transmission problem or misfire.

The Engine ‘Jumps’ When Starting

When you turn the key to start the car, you might feel the engine physically jump or lurch.

This is the vibrations transferring through the metal. As you’re starting the car, the motor has very little power. It can’t overcome the chassis’ resistance to its movement so readily.

As the engine starts running under its own momentum, it’ll exert more energy. As a result, it overpowers the opposing forces from the stationary metal. The resultant feeling is the vibrations mentioned above.

You might feel the same jump when you turn the ignition off.

If you aren’t sure, why not take a look? Motor mounts are usually located near the front wheels in the engine bay.

Take a flashlight with you to help you see, and shine it into these areas. You’ll usually get a better view from underneath.

Look for broken motor mounts. You might also notice the engine leaning in one direction (not always, depending on what’s broken). That might clue you in about which mount is bad.

If you aren’t sure what motor mounts look like, take your car to an auto shop. Ask the mechanics to have a look for you. You can always ask them not to do any work for you just yet.

Can You Drive With A Broken Motor Mount?

From a realistic point of view, you can drive with a broken motor mount. It won’t be comfortable, but it shouldn’t be too dangerous.

Please don’t take that as, “Great – I can leave it forever!”

No. You should get it fixed straight away. As with everything on cars, the longer you leave it, the more expensive it will be.

For example, it’ll put more strain on the other engine mounts. The transmission and block itself will also wear and suffer from constant vibrations. Wiring looms and coolant pipes will stretch and might snap.

So, while you can technically drive with a broken motor mount, it is a profound issue. You should still go straight to a mechanic once you identify a fault.

Driving will be at your own risk.

How Long Can You Drive With Broken Motor Mounts?

You should get bad motor mounts fixed as soon as possible. That said, you can drive your car as long as the vibrations aren’t too bad and you’re saving up to get it fixed!

Again, it’s best not to look to quantify this. It’s a better idea to turn your thinking upside down.

Rather than thinking, ‘How long can I drive with it?’, go along the lines of, ‘How soon can I get it fixed?’

You should never drive if you aren’t 100% confident in your vehicle’s condition. It’s best to get it repaired immediately.

Or, to put it another way, the longer you wait, the worse condition your car will be in.

How Much Does A Motor Mount Cost To Repair?

Motor mounts are difficult to estimate costs for.

The cost of the mounts themselves can vary significantly. It depends on the vehicle, the specification, the engine size, the material, and even which specific mount you need.

A single aftermarket mount could cost anywhere from $15 to $150. The majority average out between $25 and $80, though.

It’s often better to use the manufacturer-approved versions. These are usually significantly more expensive – anywhere from $100 to $400 per mount.

Ask your mechanic for their advice. Every car is different, so there’s no set rule, unfortunately.

Hopefully, you’ll only need to replace one mount. If several have broken, that’s a perilous situation to find yourself in. Buying an entire set of mounts can work out cheaper in this situation, but you shouldn’t need to do this. Not unless something’s seriously wrong, anyway.

If you know your way around car mechanics, you might be able to replace motor mounts yourself. You’ll need a jack for lifting the engine and a standard set of automotive tools.

It’s a much better idea to leave it to a professional. You might resist paying someone else to do what’s technically a simple job – but it’s worth it.

You don’t want your engine to suddenly fall or the jack to break something or drop the car on you. Be safe. Take your vehicle to a mechanic.

You can expect to add one to three hours of labor (depending on the mount’s position and ease of access). This could come to anywhere between $100 and $300.

Considering parts and labor, a total of about $400 is a reasonable estimate for replacing a bad motor mount.

As with everything related to cars, don’t leave it. It’s much better (and cheaper) to get these things fixed sooner rather than later.

A bad motor mount is uncomfortable, at best. At worst, your engine and transmission could be getting damaged by the constant wear.

Don’t take any chances. Head over to your local mechanic as soon as you identify the problem.

In summary? Yes, it’s usually safe to drive with a slightly broken motor mount. But why risk it? 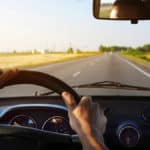